From once ‘common’ to scarce, the Nightingale is sliding rapidly towards extinction in Britain. In 2011 Paul Stancliffe, from the BTO (British Trust for Ornithology), told the Daily Telegraph: “We’ve looked at the rate of decline and continued it to make a prediction. In ten years, the population is at a really, really low level. And then somewhere between 20 and 30 years it just drops off the bottom of the graph.”

For instance in Bradfield Woods in Suffolk, one of the UK’s preimier Nature Reserves and a centre for Nightingale conservation research, Nightingales have now become extinct (below). 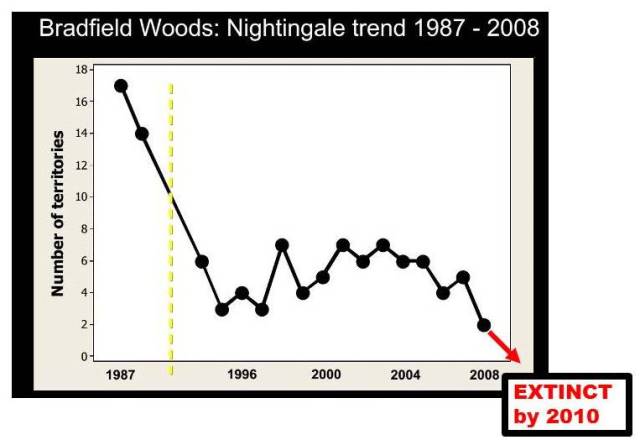 How many Nightingales are left ?

We used to have a lot more Nightingales but they have been disappearing fast.   In 2010, comparisons of earlier surveys found that between 1967 and 2007 the British Nightingale population had fallen by an alarming 91 per cent. (See Causes of Loss for why).

After surveys by members of the BTO* in 2012 and 2013, researchers calculated that there were 5,850 Nightingale territories in England (and none elsewhere in Britain).

This means there are now more people with the surname Nightingale (about 10,000) than there are  real live singing birds.

It also means there are 12,000 people living in Britain to every real live singing Nightingale, and if each singing male represents a pair of birds (optimistic), there are about 6,000 of us for each bird.  That’s one reason why, although we encourage everyone to try and hear one sing live, it’s going to be hard without the help of the BBC and other media (so please sign the petition).

Michael McCarthy reported in The Independent in 2011:

‘This is the biggest fall in numbers since records began of any bird still breeding in the UK … For every 10 nightingales which were singing in Britain when I was born 40 years ago, only one is doing so now,” said the BTO’s Dr Chris Hewson. “The rest of them have vanished. That’s the scale of what we’re talking about. Pretty sobering, isn’t it?”’

Here is a BTO map of breeding Nightingales found in 2012/3. The orange dots mostly show where Nightingales used to be found from 1967 until recently (survey sites), the blue dots where they were still found in 2012. 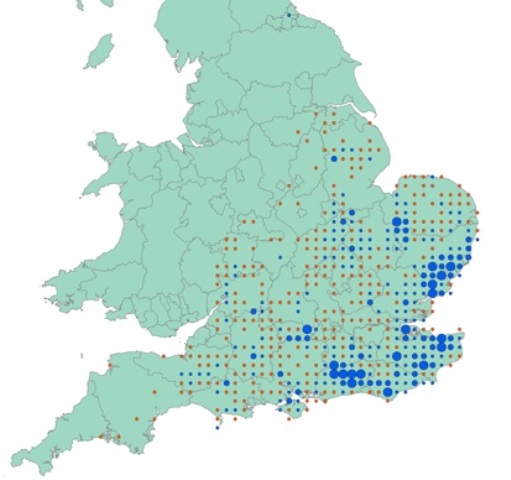 Scientists at the BTO draw on several different types of survey to assess bird populations and in 2013 they announced that just between 1995 and 2008 ‘the Nightingale population declined by a staggering 53%’.

Nightingales have both contracted in ‘range’, meaning that they no longer occur in parts of the country they used to be found in, and are becoming much rarer within the range that remains. The combination of these two trends is an ominous sign as it has heralded the extinction of other birds once widespread in Britain, such as the Red-Backed Shrike and Wryneck (most years none breed in the UK, or just one or two pairs).

‘their range is continuing to contract towards the extreme south-east of England, despite massive, local conservation efforts in traditional coppice and scrub habitats’.

This makes it one of Britain’s fastest vanishing birds, yet it has gone largely un-noticed by the general population because so few people now know what a real Nightingale sounds like, or have heard one in living memory. They are also hard to even survey because only male birds sing and once they find a mate, they stop singing at night, and they are classic ‘skulkers’, rarely venturing outside of thick vegetation to make themselves visible. Consequently the BTO has recently made great efforts to find and count breeding pairs of Nightingales in the day time, as well as taking the traditional approach of mainly nocturnal listening to count singing males.

Older surveys show that Nightingales used to be much more widespread as well as more abundant, although the BTO note that in the 2012/3 survey there was one outlier who ventured into the north:‘in both 2012 and 2013 there was a remarkable record of a territory holding bird in Cleveland, perhaps the most northerly record for many decades’ 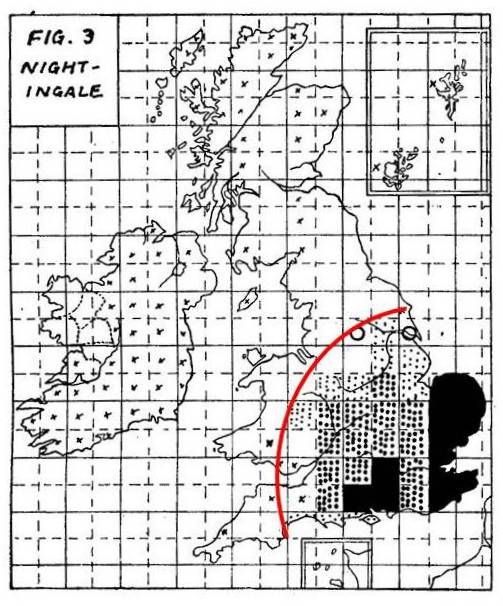 Above: areas with Nightingales found singing in a 1952 survey – red line indicates approximate NW limit of their range at the time, taking in parts of Wales, S Yorkshire and all of the Midlands and SE England (source).

Conservation groups and the water company Anglian Water are trying to help the Nightingale by improving its habitat and learning more about it’s needs, and to understand the reasons for it’s decline but if hearing a Nightingale sing is on your personal ‘Bucket List’, grab the chance while you can.

* The BTO are the detectives of the bird world and without their efforts we would know very little about Britain’s birds.   They are a mixture of amateur birdwatchers and professional researchers who conduct a variety of field surveys (also on bats and other wildlife). Some of these are as simple as counting birds in your garden, and they also give friendly advice and training so you do not need to be an expert. Visit their website for more details.

[Nightingales have a wide international distribution but they are also in decline in a number of other countries. Between 1980 and 2013 they declined by 61% across a range of European countries.  Birds also have strong ‘regional accents’ and not all foreign Nightingales have as song as beautiful or complex as the British ones:   all the more reason to get out and hear one in this country while you can.]