The Nightingale Crisis has more than one cause but the causes and solutions can be summarized like this*: 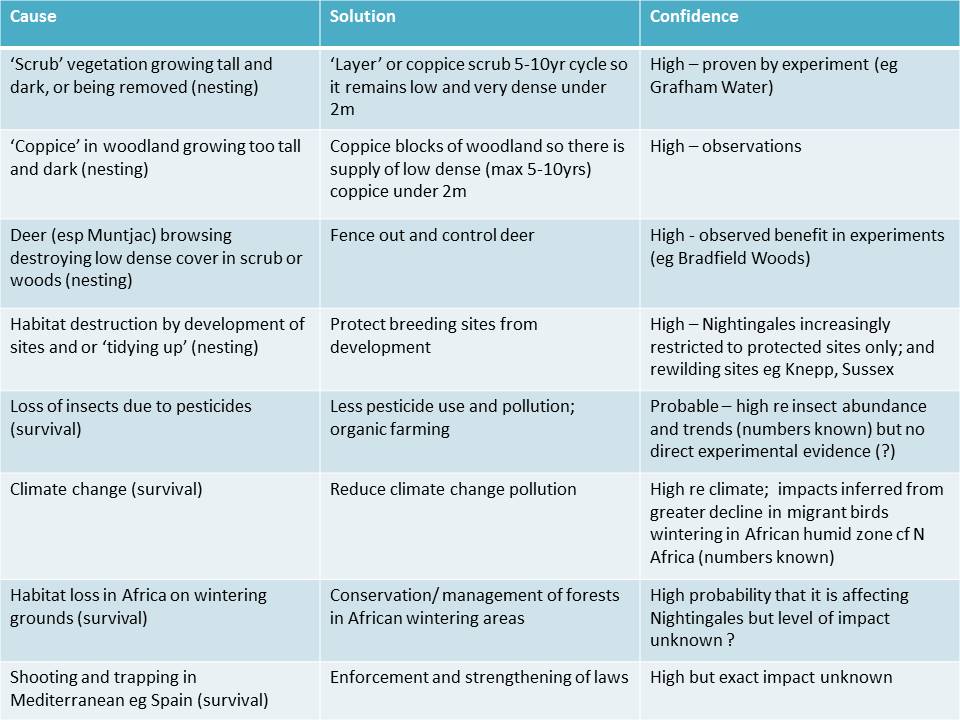 (* this is my interpretation – refer to original sources for scientific papers).

Better Scrub and Coppice – No Deer

In 2015 the British Trust for Ornithology published a booklet for landowners ‘Managing Scrub for Nightingales‘ setting out the conclusions of work done with Anglia Water to manage thickets of blackthorn, hawthorn and other shrubs at Grafham Water near Peterborough.  These experiments show that with care, it is possible to improve potential nesting areas for Nightingales and increase their numbers. 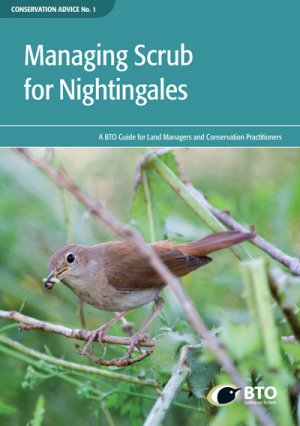 A key factor seems to be that in England at least, Nightingales like ‘impenetrably’ thick vegetation, from ground level up to about 2m.   This is commonly blackthorn or hawthorn ‘scrub’, sometimes gorse, especially interspersed with other shrubs, but can also be bramble and dog rose or in wetter areas, willow or sallow. So, if you can see through it, Nightingales probably won’t like it.

However Nightingales spend a lot of time finding ground-living insects to feed on, and so like some bare ground (for discussion of the possible importance of wood ants, see Other Possible Causes).

A dense thicket will often have bare ground inside the clumps, as in this BTO/AW diagram:

An important factor is that it must be dense right down to ground level at the edges.  This low, dense, edge is what browsing deer or sometimes rabbits will destroy.

If scrub is allowed to grow tall and ‘leggy’ it will soon cease being usable by Nightingales, so managers need to coppice it (cutting back to near the soil) or ‘layer’ it like hedge-laying (partly cutting through the stems and bending the bush flat before allowing it to re-shoot), except creating a hugely broad and long ‘super hedge’.

Managing scrub to create a mosaic of different aged areas (the ideal age being under 10 – 15 years) is on recommendation.  The total area needs to be at least an acre. 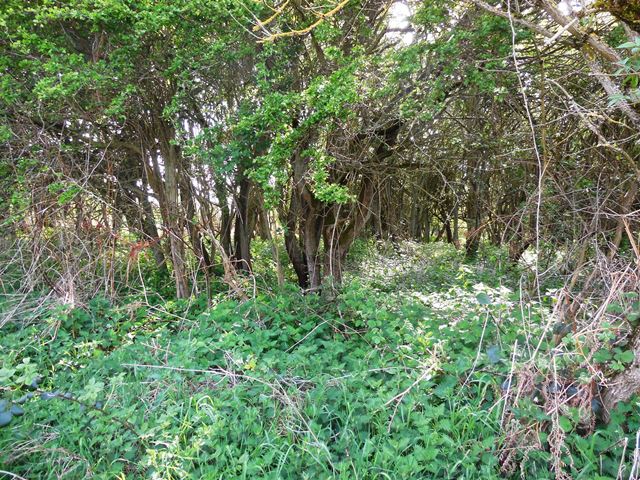 The hawthorn scrub above is no good for Nightingales as it is too ‘leggy’ and thin – you can see right through it.  This area browsed by deer and sometimes cattle.

The BTO booklet describes the success of management at Grafham Water near Peterborough, which is run by Anglia Water with the Bedfordshire, Cambridgeshire and Northamptonshire Wildlife Trust.  Starting in 2001, managers tried a mixture of coppicing and layering with rabbit fencing but the rabbits broke in, damaging regrowth.

In 2002 over 1,000 sq metres were cut, behind ‘one metre high rabbit fencing dug into the ground and two metre high deer fencing’ .  In spring 2002, 18 singing Nightingales were counted in the coppiced woodland around Grafham Water but by by 2012 there were only nine singing males ‘and suitable coppice was at a premium’.  Then in 2013, Nightingales moved into a previously unoccupied area of scrub that had been layered in 2008 and 18 singing
males were counted that spring. In 2014 a pair of Nightingales moved into some
scrub that had been layered in 2009′.  See more at the BTO report.
Coppiced woodland used to be the main haunt of Nightingales and isstill important in some areas, although in recent years birds have increasingly been found in scrub.  Coppice grows up even more quickly than scrub and may only remain suitably dense for as little as four or five years.  Many coppices are cut much less frequently than this.

See this page for the research undertaken at Bradfield Woods, which showed the effect of deer in coppice.

In scrub and woodland, Nightingales also spend time in surrounding grassier areas, which may also be important for their breeding success.

On top of these factors, even when the physical habitat seems suitable to us, and there used to be Nightingales present in the past, there may be no birds now.  This may be because young birds are attracted to an area by the singing of older males, and all male Nightingales tend to be very faithful to their ancestral homes. This in turn may make it hard for new areas to be colonized, and for old areas to be re-colonized, once Nightingales are lost (other birds showing similar declines, with similar ‘dispersal’ problems, are even thought to include the House Sparrow).  In the future, further steps might need to be taken to help Nightingales back to such places.

Isolation of small populations could even cause genetic problems.

The most successful projects are likely to be where good Nightingale nesting habitat is encouraged or created within earshot of other singing Nightingales.   One such place where this may have helped is the re-wildling project at Knepp Estate in West Sussex, described in the blog The Resurgent Nightingales of Knepp, by The Ecologist on 7 May, 2015.

I have lived in Sussex for almost ten years, but can count on one hand the amount of times I have heard a nightingale. Yet here I am in the Knepp Estate near Horsham in West Sussex, hearing four at once!

Knepp is the largest ‘re-wilding’ project in the UK and very inspiring it is too. Once intensively farmed, the 3,500 acres here have been allowed to regenerate over the past 14 years, with minimal human intervention.

The managers of Knepp say: ‘Amazingly, ecologists estimate we now have around 2% of the total UK population of nightingales breeding at Knepp’.  (Which suggests over 100 singing birds).  Knepp is the largest rewilding project in England and suggests that benign neglect of farmland (plus at Knepp some ‘wild’ grazing) could be instrumental in bringing back Nightingales, especially in places not far from remaining populations (as is the case in large areas of Sussex).