Changing food sources may be affecting nightingales, through mechanisms that are unknown but could include climatic or other human made changes.

In the 1960s the effects of DDT and other organochlorine pesticides which built up in the food chain and causes thinning of eggshells, became notorious. Others such as the nerve-agent organophosphates were also shown to affect many types of wildlife (and people). A lot less recent attention has been given to researching the effects of pesticides on birds but that is starting to change, with growing concern at the parallel declines of a wide range of insects (eg moths and bees), and birds.

One of the possible reasons is the very widespread use of a newer type of pesticide called neonicotinoids or ‘neonics’, which are strongly implicated in the loss of wild bees and honey bee colonies (see eg this review by Dave Goulson).

Dr Goulson told the Daily Telegraph that 90 per cent of neonicotinoids go into the soil and leaches into groundwater, where it persists for years. It can be absorbed by hedgerows and plants that the wider wildlife relies on. Mice and other mammals eat the seeds, while butterflies and moths survive on nectar and pollen from plants absorbing the chemicals.

“Any pesticide that can persist for many years, build up in soil, and leach into waterways is likely to have effects far beyond the pest insects it intends to target. This is particularly so when the pesticide is highly toxic to non-target organisms. For example, less than one part per billion of imidacloprid [a neonicotinoid] in streams is enough to kill mayflies.”

The RSPB says it is ‘extremely concerned’ about the impacts of neonicotinoids.

It is quite possible that birds like the Nightingale are being affected by these chemicals both because they cycle through soils and water, reaching many places apart from farmer’s fields, and because they kill large numbers of insects.

‘Our results suggest that the impact of neonicotinoids on the natural environment is even more substantial than has recently been reported and is reminiscent of the effects of persistent insecticides in the past’.

More on neonics and birds here.

Of course other factors may also be at work, and these may inter-act with those already mentioned. Scientific research will probably solve the puzzle but old naturalists accounts may also offer clues to investigate.

For instance, Nightingales have long been known to feed their young not just on caterpillars but on worms and ants. Almost every old naturalist’s account mentions them.

This may be one reason why as well as trees and thick vegetation, they like open ground in their nesting areas. In the past, many grasslands around woods and scrub supported ant nests but today they are few and far between as they do not survive ploughing, re-seeding and chemical treatment with fertiliser or pesticides. Some species of wood ants (which do live in woods but will also enter scrub and grassland) and meadow ants are in severe decline in Britain.

Even Neonicotinoid pesticides could be involved – they are also used to kill ants, ‘Neonics’ affect bumble bees by changing their ability to navigate, clean themselves and look for food and can radically change ant behaviour.

For instance back in 1911 when naturalists were puzzling over the limits to the Nightingale population one study (Ticehurst, N.F. & Jourdain, F.C.R. 1911. On the distribution of the Nightingale during the breeding season in Great Britain. Br. Birds 5: 2–12) reported that:

‘Mr. D’Urban also suggests that the presence or absence of the wood-ant (Formica rufa), on the pupae of which the young are largely fed, and the abundance of whortle-berries, particularly in the oak-copses of the Teign, also have some bearing on the Nightingale’s distribution in Devonshire’.

This particular ant (large and juicy) was also widely used to feed captive Nightingales, popular as cage birds in Victorian times (disastrously, nearly all died quite soon) and as bait to catch them.

An even earlier study CURIOUS FACTS IN THE HISTORY OF INSECTS; INCLUDING SPIDERS AND SCORPIONS described in 1865 how they were collected in Germany and Switzerland:

The pupæ or cocoons of the Ants, during the day, are placed near the surface of the Ant-hills to obtain heat, which is indispensable to the growth of the inclosed insects. This is taken advantage of in Europe to collect the cocoons in large quantities as food for nightingales and larks. The cocoons of a species of Wood-ant, Formica rufa, are the only kind chosen. In most of the towns of Germany, one or more individuals make a living during summer by this business alone. “In 1832,” says a contributor to the Penny Encyclopedia, “we visited an old woman at Dottendorf, near Bern, who had collected for fourteen years. She went to the woods in the morning, and collected in a bag the surfaces of a number of Ant-hills where the cocoons were deposited, taking Ants and all home to her cottage, near which she had a small tiled shed covering a circular area, hollowed out in the center, with a trench full of water around it. After covering the hollow in the center with leafy boughs of walnut or hazel, she strewed the contents of her bag on the level part of the area within the trench, when the Nurse-ants immediately seized the cocoons, and carried them into a hollow under the boughs. The cocoons were thus brought into one place, and after being from time to time removed, and black ones separated by a boy who spread them out on a table, and swept off what were bad with a strong feather, they were ready for market, being sold for about 4d. or 6d. a quart. Considerable quantities of these cocoons are dried for winter food of birds, and are sold in the shops.”

In 1993 Martin Warren and Rob Fuller wrote in their study of the effects of the decline of coppicing:

Nests of the wood ant Formica rufa reach highest densities in the first few years after cutting, with very few remaining after canopy closure. Its national decline may be partly due to the widespread cessation of coppicing.

Across Europe, wood ants are under threat and for some species; their range seems to be shrinking. A number of studies have shown that forest fragmentation and human disturbance all have negative impacts on wood ants …[and] Formica rufa has vanished from some parts of northern England, north Wales and the Midlands.

For the Southern wood Ant, Formica rufa, it noted:

maintaining sunny glades and rides is important, particularly on south-facing slopes, in order to provide the high levels of insolation the ants need. Wood ants are relatively adaptable however and nests will also encroach onto heathland and scrub adjacent to the woodland if there is sufficient food available

It may be a coincidence but it is noticeable that many places well known for wood ants are also strongholds of Nightingales or they are reported from those places.

For example: Abbots Wood (Sussex) ‘famed for its wood ants’ and with 23 singing Nightingales (2012); (in 2000) Langdale Wood in Wyre Forest Worcestershire, known for Nightingales and Southern Wood Ants; Blean Woods in Kent; Willoughby Fields Local Nature Reserve in Crawley; Hunt’s Wood, Kenardington in Kent with ‘a large Nightingale population’ and wood ants ‘common’ in 2001; Burnham Beeches which ‘has long been known for its wood ants Formica rufa’ and has Nightingales (1983?); Hanningfield Reservoir in Essex: ‘Nightingales have also been heard in the tree canopy in recent years’ and ‘’look out for wood ant nests’; Little Baddow Milennium Walk in Devon, with Southern Wood Ants and ‘the encroaching scrubland provides the most westerly breeding site in England of the nightingale’;

The ‘Southern Wood Ant’, like the Nightingale, is not expanding north with the warmer climate, but if anything, retreating south.

‘The overall pattern seems to be that F. rufa is struggling at the northern edge of its range … This view is at odds with the general climate-change driven pattern of species shifting their distributions north, as conditions become more clement. This may suggest that local weather patterns, habitat fragmentation and habitat loss are more significant drivers of extinction for wood ants than overall changes in climate’

The wood ant alone however, can’t explain the decline. Andrew Henderson comments: “Nightingales do like wood ants if they’re present – but there are many sites with dense populations that lack wood ants. My work in coppice in Kent in the 1980s looked at food at two sites, one with wood ants, the other with none. At the first, the ants were the dominant food source. At the other, the key items were small beetles and spiders. It’s true that the second site has now lost its nightingales, but it is a chalk woodland with not much coppicing any more, and relatively high and dry (and dry sites have tended to lose nightingales as they’ve moved to lower wetter areas). There are many scrub sites with increasing numbers that do not have wood ants”.

Shooting and Trapping in The Mediterranean

The RSPB states: ‘ Up to a thousand million birds may be killed every year in the Mediterranean … (which) may be more than 15% of the total number that spend the winter in or migrate to that area’.

Spain lies on the migration route of Nightingales from the UK. Every year around four million migrating birds are killed in glue traps set by Spanish bird hunters. 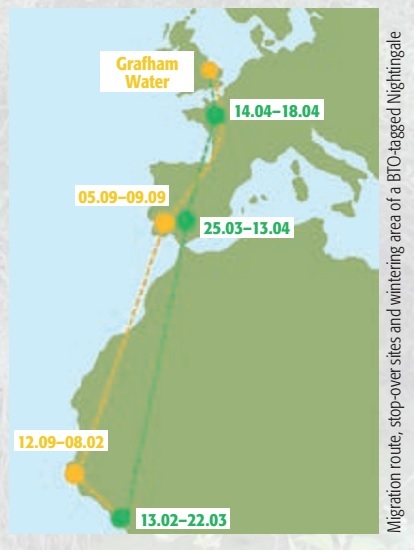 Nightingales occur elsewhere in Europe and other populations will also be migrating across the Mediterranean each year. They will face places like Malta where Nightingales are known to be amongst the birds slaughtered, and further east, Cyprus. In autumn 2010 BirdLife Cyprus estimated that 1.4 million birds were killed by trappers in the Famagusta and Larnaca Districts alone.