Many books have been written about Nightingales or have featured Nightingales.  Some of the best are by Richard Mabey, Britain’s greatest living nature writer.

The Book of Nightingales is a natural, human and magical history of the Nightingale, and above all an exploration of why we fall under it’s spell.

This is how it begins: 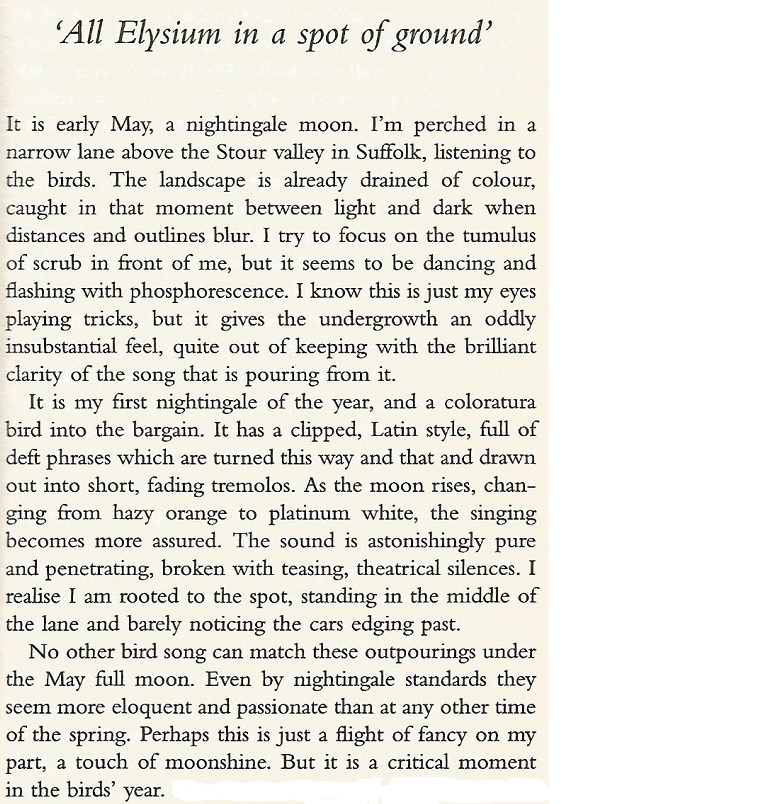 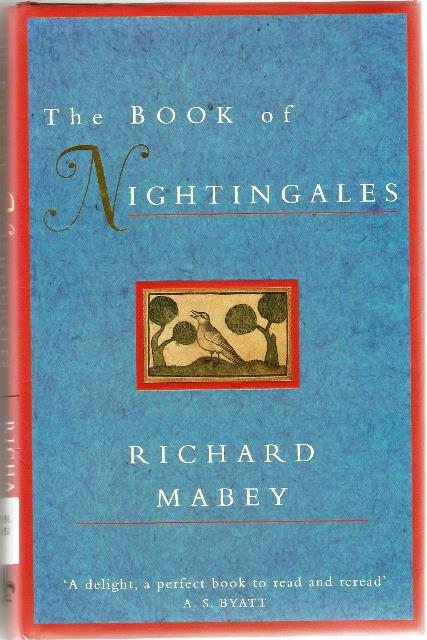 (It was also published as Whistling in the Dark). 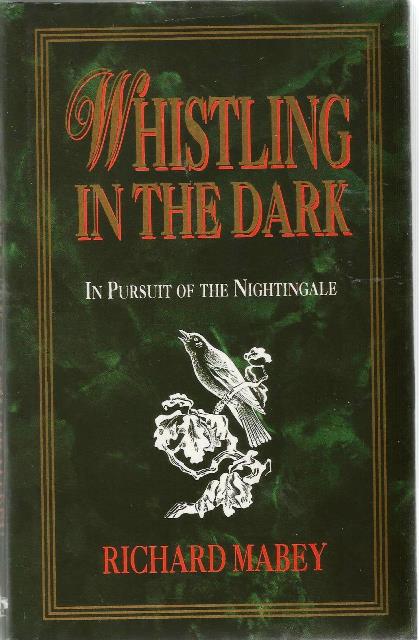 The Barley Bird is all about the Nightingale in Suffolk, where ‘Barley Bird’ is the local name. 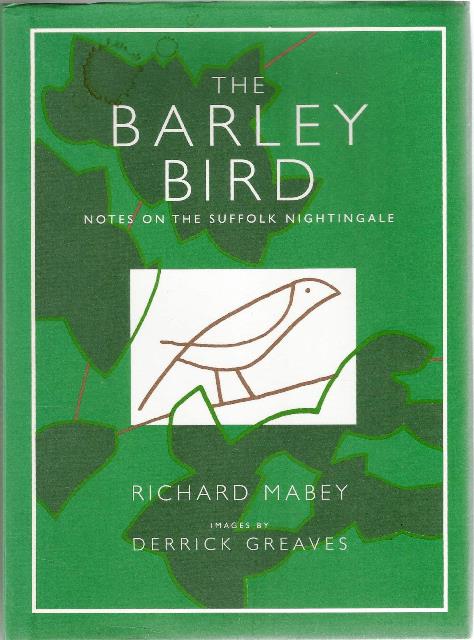 Richard says:  “The anciently traditional moment for the first nightingales to arrive on Westleton Heath (just inland from Minsmere) and give their first brief song flourishes, is April 17. Peak song time is around the May full moon, which this year is May 4.” 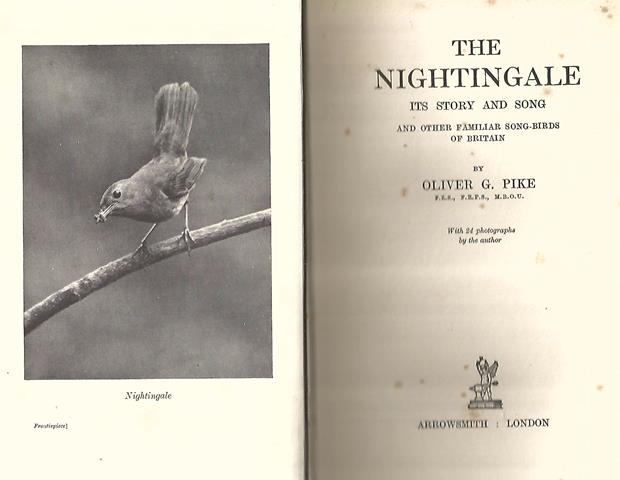 A great old book is The Nightingale and It’s Song (which is also about other birds) by Oliver Pike, published in 1932 by Arrowsmith.  You can get it via second hand book-sellers.  Pike made films and wrote books about wildlife up until 1950.  He lived in Leighton Buzzard and seems to have spent a lot of time in Oxfordshire, where he says “it is common in suitable places” and “I have seen more nightingales close to the city of Oxford than in any other part of England” (sadly not true today).  Pike’s chapter on the bird is full of closely observed natural history of the type sadly lost from many modern, more ‘scientific’ studies.

Pike identifies three different types of Nightingale nests, describes feeding young, courtship and calls in detail,  and says he heard one bird repeat the characteristic long whistle in it’s song 35 times.  Nightingales he says, like to have oak trees nearby, often nest at the edge rather than deep in a wood, like grassy glades as well as thick low vegetation, and, like many other people, discusses why some Nightingales are ‘much better’ singers to human ears than some others.

The best listening time he says, is a ‘warm, damp evening during the last week in May’ (these days we need to fast forward that to earlier in May, thanks to climate change ?), and nights when there is a cold northerly wind are ‘almost useless’.  Thunder on the other hand makes the birds sing better, trying to compete against the noise.  He also points out that dawn is good time to hear them (especially once they are nesting when most authors agree they stop singing at night) and sometimes between 1pm and 3pm in the afternoon.  Pike is also gently critical of the BBC’s choice of the cello for it’s broadcasts (which were in those days, annual events), suggesting that jazz and ‘a battery of big drums’ would be more effective. 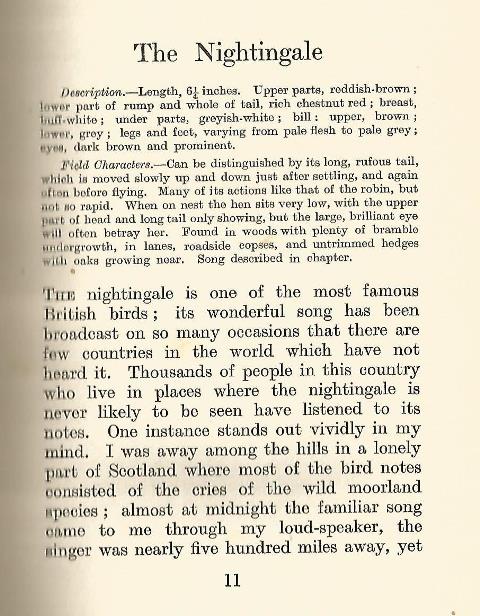 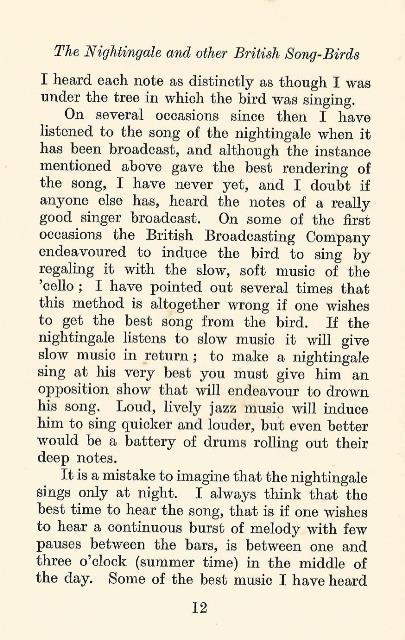 All in all the picture of the Nightingale he paints in the 1930s is of a bird still very widespread in S England and still common.  He details one ‘master singer’ encountered in a wood nine miles from London (probably part of Epping Forest ?) encountered during a sultry evening of thunder and lightning.

‘He was singing against the storm, and the louder the thunder roared, the better was his music.  I listened to him until the clouds broke, and even then, when the moon was trying to throw her beams through the waning storm, he continued to answer the challenge’.